EMERGENCY ALERT Extra Federal Food Benefits Due to COVID-19 Will End in March Read On...

What is Social Vulnerability?

Every community must prepare for and respond to hazardous events, whether a natural disaster like a tornado or disease outbreak, or a human-made event such as a harmful chemical spill. A number of factors, including poverty, lack of access to transportation, and crowded housing may weaken a community’s ability to prevent human suffering and financial loss in a disaster. These factors are known as social vulnerability.

What is the CDC/ATSDR Social Vulnerability Index?

ATSDR’s Geospatial Research, Analysis & Services Program (GRASP) created databases to help emergency response planners and public health officials identify and map communities that will most likely need support before, during, and after a hazardous event.

The CDC/ATSDR SVI uses U.S. Census data to determine the social vulnerability of every census tract. Census tracts are subdivisions of counties for which the Census collects statistical data. The CDC/ATSDR SVI ranks each tract on 15 social factors, including poverty, lack of vehicle access, and crowded housing, and groups them into four related themes. Maps of the four themes are shown in the figure below. Each tract receives a separate ranking for each of the four themes, as well as an overall ranking. 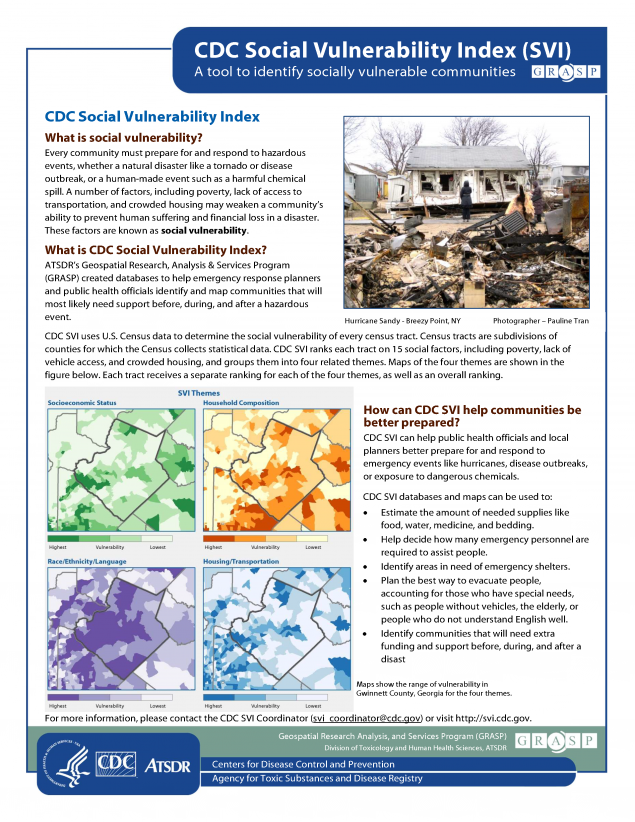 How Can the CDC/ATSDR SVI Help Communities be Better Prepared?

The CDC/ATSDR SVI can help public health officials and local planners better prepare for and respond to emergency events like hurricanes, disease outbreaks, or exposure to dangerous chemicals.

The CDC/ATSDR SVI Databases and Maps Can be Used to: